According to EN 81.77, lifts must be designed, developed and manufactured taking into account the seismic risk of the area where the lift is to be installed. The standard was harmonized in the first months of 2014.

According to national law, construction companies are committed, for each edifice to be constructed in the respective region, to determine the maximal possible horizontal acceleration (Ah) caused by an earthquake. The criteria of the construction project must be adapted to the seismic risk level of the construction area.

According to the standard EN 81.77, criteria of the lift designing as well have to take into account the value of acceleration (Ah).

It is a matter of common sense to decide upon the installation of an elevator in compliance with the standard EN 81.77 in seismic risk areas, where new constructions already comply with the criteria of seismic risk, namely because a lift may result unusable after an earthquake while the building itself has structurally survived.

Hydraulic systems require less adaption to comply with the regulation EN 81.77. This is why conformity-based hydraulic systems have a competitive advantage in terms of simplicity and pricing, compared to mechanical systems complying with the same standard.

Elevators complying with the standard EN 81.77 present the following features:

The anti-seismic systems are especially suited for areas with high seismic risk: in Europe, there are Italy, Greece, Romania, Portugal, Turkey and some areas of Spain and France.

In Italy areas such as Sicily, the Eastern Alps, the cities and towns situated along the central and southern Apennines, from Abruzzo to Calabria, are subject to frequent and intense earthquakes due to the geological structure of our country.

From 2002,  Italy has been divided in four seismic areas, based on the classification given by the National Institute of Geophysics and Vulcanology (INGV): 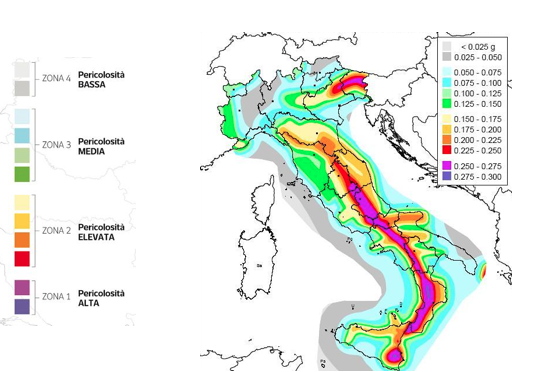 Regardless of the compliance with the standard EN 81.77, which states how anti-seismic lifts have to be built, it is important to take into account that hydraulic lifts have a low seismic vulnerability thanks to their structural characteristics.

Regarding recent seismic events in Italy and abroad, several scientific articles published on the most authoritative specialist magazines in the elevator branch1, declare unanimously in relation to earthquake-caused damages of lift systems,  that in case of an earthquake, lift systems with hydraulic technology are much less vulnerable than electric lift systems of latest generation, which have counterweights and machinery fixed on top of the lift shaft.

As a consequence, as there are fewer downtimes of hydraulic systems caused by seismic events, the elevator might be kept operating, for some reasons, even during or directly after an earthquake.

This website uses cookies to improve your experience while you navigate through the website. Out of these, the cookies that are categorized as necessary are stored on your browser as they are essential for the working of basic functionalities of the website. We also use third-party cookies that help us analyze and understand how you use this website. These cookies will be stored in your browser only with your consent. You also have the option to opt-out of these cookies. But opting out of some of these cookies may affect your browsing experience.
Necessary Always Enabled

Any cookies that may not be particularly necessary for the website to function and is used specifically to collect user personal data via analytics, ads, other embedded contents are termed as non-necessary cookies. It is mandatory to procure user consent prior to running these cookies on your website.

SAVE & ACCEPT
Scroll to top // code in Secondary language